The Amazon is called the lungs of the earth because it plays a vital role as an essential carbon storage that slows the pace of global warming. Without the Amazon's carbon absorption capacity, a rise in global temperature will accelerate and have devastating effects on the earth. Beside its carbon absorbing role, the Amazon is home to more than 3 million animal and plant species, more than one million indigenous people and many more millions of local communities that try to live in full harmony with the Amazonian rainforest. The levels of deforestation have increased dramatically during the past 2 years under the impulse of the Brazilian president who has encouraged industrial agriculture and mining activities in the world's largest rainforest. Relentless deforestation paired with massive wild fires to create cleared fields for cattle grazing and soya cultivation, big earners for Brazil, have a fatal impact on the Amazonian ecosystem. Experts estimate that at this pace of more than one football pitch being burnt and cleared every 45 seconds, the point of no-return will be reached in a couple of years. This point of no-return has been reached a long time ago in the Brazilian State of Mato Grosso, south of the Amazon, where the Sehado, a tropical savannah ecosystem, has been gradually and systematically destroyed to make place for cattle ranching, new towns and settlements, roads and mono-culture plantations. Mato Grosso is nowadays the heartland of Brazilians' industrial agriculture with the majority of its forests and fauna gone, leading to yearly record breaking temperatures well beyond 40 degrees and a desertification process starting to appear except in few protected areas remaining like islets in the middle of a mono-culture desert. The natural habitat of indigenous people and local communities is under tremendous pressure pushing deforestation deeper and deeper towards the heart of the Amazon, the "green" frontline is expanding at an ever growing pace; threatening their lifestyle, livelihood, subsistence and eventually survival. The earth will be next in line.
The river bank along the Tefé river and its lake. Enormous variations in water level occur between the wet and dry season, hence a combination of floating habitations and houses on pilotis. Tefé, Amazonas state, Brazil, October 2020
? David Verberckt/2020 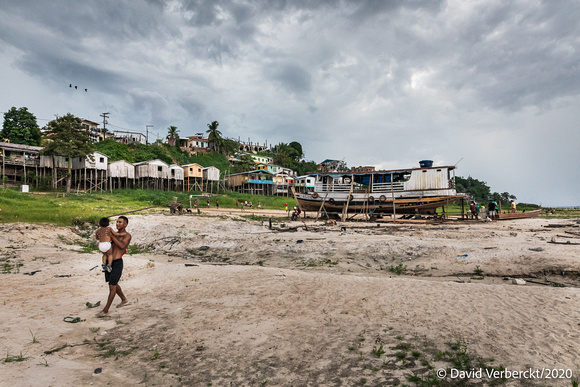