More than10 million people worldwide have no nationality and most are stateless by no fault of their own. Not having a nationality usually occurs because of discrimination against certain groups.
Over a million Rohingya live in Myanmar (Burma) where they are stateless in their own country.

The Rohingya are a Muslim minority, living mainly in the Northwestern Sate of Rakhine, Myanmar (Burma).
They have been discriminated, persecuted and deprived of citizenship since the end of the seventies by the Burmese authorities and are not even recognized as a minority. As a result, Rohingya have been segregated and excluded from civil society in places they have lived for several generations.

Without citizenship or documents, Rohingya belong to no country and are deprived of civil, social and human rights. They will usually be denied access to the legal labour market, to basic health care services and, most of all, to proper education.

In Myanmar they have been relocated in interment camps for internally displaced persons, not allowed to leave without permission and police escort. More than half a million Rohingya have fled to Bangladesh during the past decades, to makeshift camps and registered refugee camps. Prospects for education, employment, basic human rights, such as housing and access to medical facilities, and hope for dignified life are practically inexistent and impossible for the stateless.

Thousands have fallen victim of human smugglers on their way for a better life in Malaysia or India, ending up in prison camps and held for ransom or in situations of bonded labour. The proportion of families that have been resettled in Europe or the US where they can start a new life is extremely low compared to the scope of this forgotten tragedy.

Having usually no other document than a registration card, Rohingya are usually not allowed to travel within their own or host country without the risk of being arrested and jailed. Being stateless keeps them in a poverty limbo on the extreme margins of society.


This is a story of the stateless and forgotten Rohingya Rohingya child infected by malaria, makeshift refugee camp in Shamplapur, Bangladesh, June 2015
©David Verberckt/2015 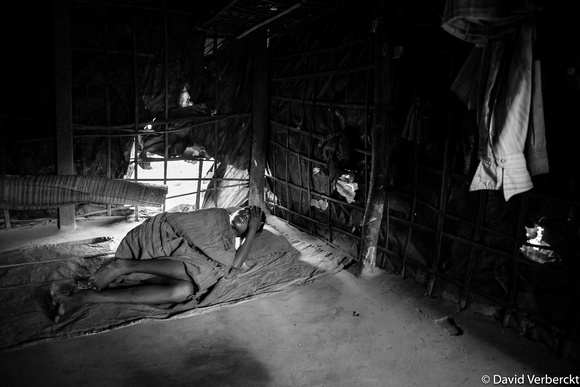