The Orang Asal are the indigenous people of Malaysia and about 2.1 million. Orang Asal is the term for "Original People" in Malay and refers to the aboriginal communities of Sabah and Sarawak in East Malaysia (Northern Borneo) and Peninsular Malaysia where they are known as Orang Asli. The Orang Asli are only about 150,000 and less than 1% of the population, they are further divided in ethnic subgroups and tribes. In East Malaysia there are many more sub-groups and tribes and they make up more than 50% of the population in the States of Sabah and Sarawak.
The Orang Asal have their own religions and customs, as well as unique languages. Orang Asal are as "Original People" of Malaysia granted special privileges under the Constitution of Malaysia. However, their communities remain substantially marginalised in contrast with ethnic Malays. Especially with regard to land use and ownership, which is often grabbed for agriculture, mining and development purposes. In particular (illegal) logging, mining and palm oil plantations that often occurs on what is considered Orang Asal traditional land and hunting ground, have dramatic effects forcing them to move out of their traditional habitat and live in resettlement areas. The Bakun Dam project in Sarawak has forcibly moved more than 11,000 people from their traditional lands. Also, many have in the past decennia been pressed to assimilate into main-stream culture and convert to Islam.
The Orang Asli in Peninsula Malaysia have lifestyles varying from fishermen to farmers to hunter-gatherers. Though most are now settled, some remain semi-nomadic with the rainforest as their privileged lands.
Many Orang Asal in Sarawak are still involved in hunting and fruit gathering keeping a semi-nomadic lifestyle and staying sometimes for weeks in traditional longhouses deep in the rainforest.
Unfortunately, the rainforest, their natural habitat, is under immense pressure with deforestation pushing the Orang Asal further away and threatening their lifestyle marginalising them even more.
Child of the Bateq community, a tribe of the Orang Asli. During the past decennia mine exploitation, logging and widespread palm oil plantations have severely jeopardized their lifestyle and livelihood. Through re-settlement projects they are mostly living in small community clusters at the edge of the rainforest. Pecah Keljbi settlement, Merapoh, Pahang, Malaysia, February 2020
©David Verberckt/2020 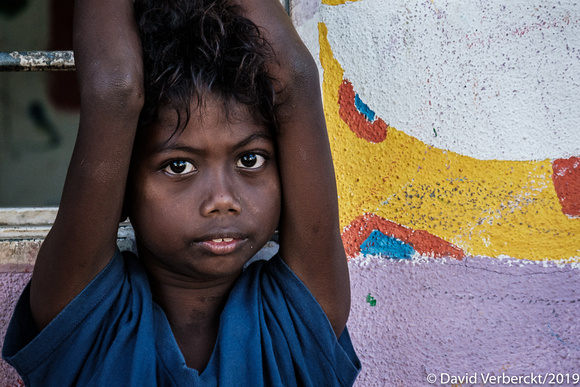