Memories Of My Country

A local music band visiting villages before Easter celebrations, El Almendro village, El Salvador, April 2019
Migration from El Salvador is shaped by a legacy of civil war, deeply rooted social inequalities, violence and climate change. El Salvador and its population of 6.4 million is the smallest Central American country, yet the most densely populated of the region. A post-conflict stagnant economy, natural and climatic disasters and high levels of violence have pushed growing numbers of people to leave over the past 3 decades. Most by far make their way to the U.S. where nearly 1.5 million El Salvadorans live. Persistent social unrest erupted into open conflict by the mid-1970s, culminating in a bloody civil war between 1980 and 1992. The U.S. played a pivotal role by providing enormous levels of funding, military aid, advisors and training to the right-wing government in power. The conflict displaced roughly one fifth of the population and some 75,000 people were killed during the war in addition to the thousands who were tortured and disappeared. More than 85% of these atrocities were committed by government troops supported by the U.S., according to a U.N. Truth Commission report. After the war the unequal economic system remained basically the same resulting in worsening living conditions and widening inequalities in an economy artificially sustained by remittances from the ever growing Salvadoran migration abroad. Today, levels of violence are even higher than during the civil war in certain areas and have affected entire communities. The overwhelming majority of victims being the poor working class Salavadorans who must live and conduct their lives in some of the most dangerous areas and who cannot afford private security companies to protect them. This situation contributes at maintaining a large flow of Salavadorans leaving the country. Climate change and natural disasters is also a reason why Salvadorans leave there country. Repetitive droughts and rising temperatures have substantially altered agrarian practices pushing large portions of the rural population towards the city and eventually immigration. El Salvador is a large coffee producer, in recent years coffee producers have more and more difficulties to cultivate the coffee at what were once normal altitudes between 800 and 1200m. Because too high temperatures coffee is being cultivated at higher and higher altitude, even above 2000m with as result higher production costs and less available land. With falling world prices, more and more Salvadorans have to abandon coffee production as moving higher in the mountains is not possible for all involved in the coffee production. People leave, memories stay.
©David Verberckt/2019 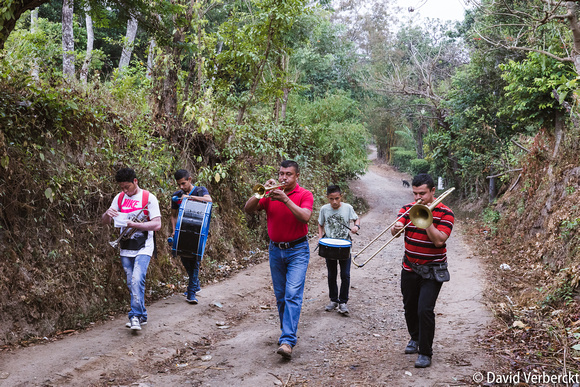