Jakarta the Indonesian capital of more than 10 million is sinking! As rising sea levels were not bad enough, the capital also suffers of severe subsidence or surface sinking. Its buildings and population extract most of their water needs by drilling water wells into the underground aquifers, rendering it susceptible for collapse. Experts estimate that by 2050 more than 95% northern Jakarta's coastal districts could be submerged. Also, one of the main reasons of the increasing scale of floods in Jakarta is because the city is sinking and that rain water tends to stagnate rather than to wash out to the sea as coastal areas where rivers flow out are under the sea level.
During the past decennia river water became too polluted to be used as the main source for piped water, and a shift was made towards digging deep water wells all over the city. This happened in an un-controlled and often illegal way, draining drop by drop the underground aquifers on which the city rests and creating enormous air pockets making the surface unstable and eventually making the ground to sink and collapse. Almost half of Jakarta lies now below sea level and coastal districts of the city are sinking at an alarming rate of up to 25cm per year!
Flooding, subsidence and traffic congestion are the main reasons why the Indonesian authorities want to relocate the capital to the island of Borneo in the next few years.
Jakarta is sinking faster than any other mega city in the world, faster than the rise of the sea caused by global warming.
One of the massive ongoing (development) projects, which the authorities say will help rescue the city of being submerged, is the "Great Garuda" in the Bay of Jakarta, consisting of a 30 Km outer sea wall along several artificial islands packed with luxury real estate. The idea is to create and artificial lagoon in which water levels could be controlled and lowered in order to allow the city's rivers to drain naturally into the lagoon and eventually the sea. This in return would help to prevent deadly floods which are becoming a major issue. Experts and environmentalists argue that such project is not going to stop the sinking of the city for which the sole viable solution would be to stop all ground water extraction and only rely on other sources of water such as piped water from reservoirs filled with river and rain water. For this more effort should be invested in decontaminating and cleaning rivers, dams and lakes.
The social impact of the city's subsidence, floods and frantic real-estate development is huge on the autochthon population living along the rivers and in the coastal districts. Neighborhoods are being nearly permanently flooded, re-claimed for real-estate projects, or partly evacuated to build concrete river embankments and sea walls, or just because the grounds become too unstable to live on them, pushing soon hundred thousands of people in an extreme precarious situation.
Fishermen will in the immediate future have their livelihood compromised as the Bay of Jakarta will become clogged with artificial islands and sea wall affecting natural currents and fish stock.

Muara Baru neighbourhood in North Jakarta where most of the soil is sinking at a rate of 10 to 20cm per year. The instability of the ground is provoked by widespread drilling of water wells for new real estate projects, creating huge air pockets once the water is exhausted. Waduk Pluit, North Jakarta, Indonesia, March 2020
©David Verberckt/2020 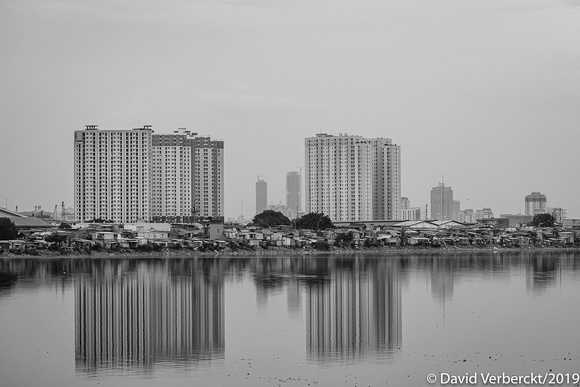